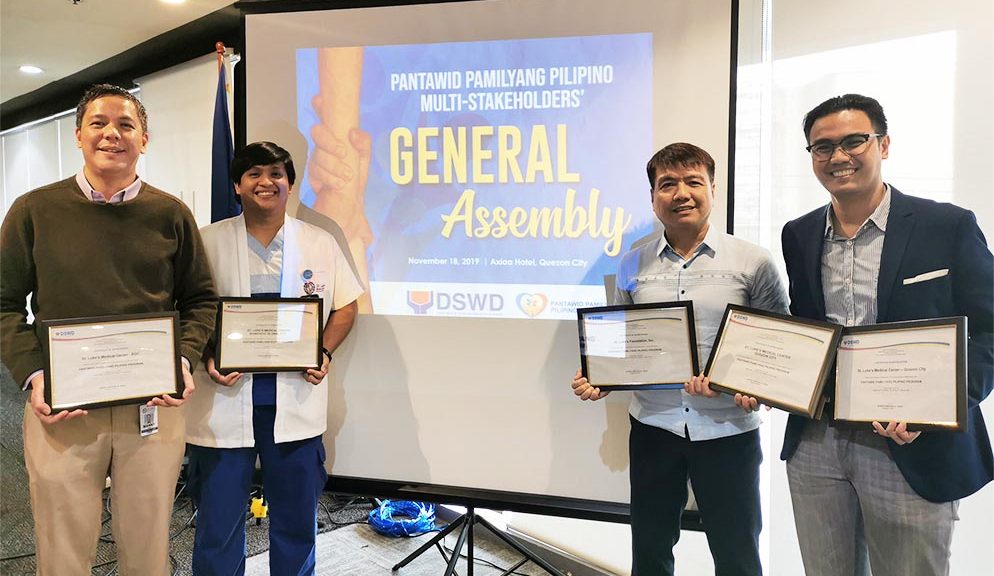 For having the most number of contributions in the sustainability on Health program, the St. Luke’s Foundation and its community outreach partners Nursing Care Group of St. Luke’s Medical Center in both Quezon City and Global City received five special citations from the Department of Social Welfare and Development (DSWD).

During the Annual Stakeholders General Assembly at the Axiaa Hotel in Quezon City last November 18, 2019, the DSWD honored the St. Luke’s team for its provision of health services in support of the implementation of PantawidPamilyang Pilipino Program (4Ps) and the amount of contribution it provides on the Health of the 4Ps beneficiaries.

St. Luke’s Nursing Care Group was particularly cited for its simultaneous implementation of a longer-term Community Adoption Program in Barangay Baesa in Quezon City and Western Bicutan in Taguig City which the Foundation funds.  It is an integrated community based program on health training, lectures, and preventive medicine awareness campaign for 4Ps families that ultimately empowers the entire community to take care and take charge of their own health. In 2017, St. Luke’s NCG-Global City bagged the Model in Public-Private Partnership Award during the same occasion.

DSWD is the lead government agency in the formulation, implementation and coordination of social welfare and development policies and programs for the poor, vulnerable and disadvantaged. It initiated the 4P as a national government anti-poverty and human development measure to provide conditional cash grants to the poorest of the poor, to improve the health, nutrition, and the education of children aged 0-18.